What It Means to Be on a Hit List

I guess it was earlier this year I dumped some unwanted Athletics cards on Fuji. He retaliated with a healthy dose of what I would label as Cubs goodness. Actually, I thought it was too much . . . so, I slowly accumulated a few A's autos and some other fun cards at a few card shows and sent them west.

Well, that second tiny package placed me on Fuji's Hit List. Fear not, loyal readers, for am alive and well. Fuji's Hit List is a list of traders he needs to send cards to or "hit back" with cards.

Honestly, I was just trying to even the score a bit. I'm not big into "one-upping" someone in a trade, but I do try my best to make sure everyone is happy with their return.

Here's the true problem though . . . I wasn't happy with what I sent Fuji. Thus, the second package. Hey, a guy's gotta sleep at night.

Lesson learned. Trifle with Fuji and you have to deal with the consequences.

Luckily, those consequences come in form of more Cubs goodness. 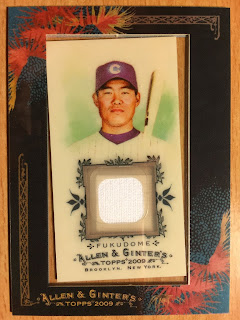 First up is a mini framed relic from the 2009 Allen and Ginter's set. Yep, I have a Kosuke Fukudome player collection... I actually chased his cards until I fell under the spell of The Vogelmonster. 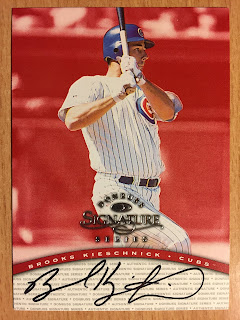 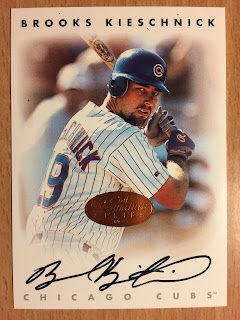 Kieschnick played for the Cubs . . . all the more reason to add some cards to my collection! I'm now up to 85 different cards in my Kieschnick Cubs cards collection. 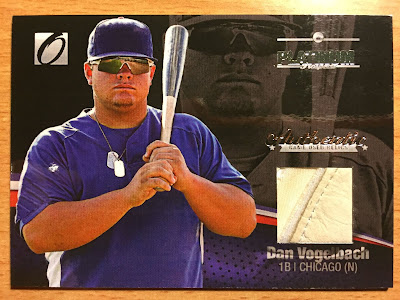 Imposing glare, scruffy chin, sweet shades, dog tags, big biceps. This is the picture of the Destroyer of Baseballs. Wait. I almost didn't see the relic! The back states his batting gloves were sent directly from the Vogelmonster himself to Onyx and they guarantee their authenticity. Sweet deal!

So, yeah. Fuji is the man. He sends out cardboard like a boss. Not like a mob boss or something, although the Hit List is not something to take lightly.

Fuji. I appreciated your generosity and I yield, Good Sir.
May the Cardboard Gods bless upon you good fortunes and tidings as you break open your next blaster. (As long as I don't make the Hit List again!)
Posted by P-town Tom at 12/19/2018 06:08:00 PM