Bowman's Top 5 Prospects from 5 Years Ago

I received a surprise package from Johnny's Trading Spot earlier in the week. It was a simple three card packaged, but boy did it ever pack some punch! 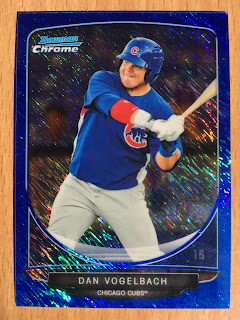 This one is a mini from the 2013 Bowman Cream of the Crop insert set. The blue shimmer parallel is probably my second favorite parallel affect out there right behind Open Day's sparkly blue parallels.

Here's the back of the card, which features a list of the Cubs five top prospects from five years ago. 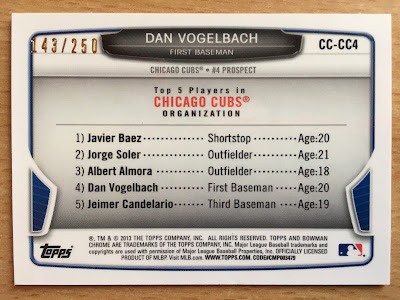 All things considered, that's not a bad list. If I had to rate them on their career performances so far it would look like this:
1) Javier Baez - He has earned the nickname El Mago for his quick tags, deceptive slides and defensive highlights. His bat has turned him into an MVP candidate for 2018.
2) Albert Almora - will finish 2018 with 150+ games played and an average north of 0.280. He's a plus defender in the outfield and hits left-handers especially well.
3) Jeimer Candelario - Had a cup of coffee with the Cubs in 2016 and hit 0.330 in 106 plate appearances last season. This year he has battled a couple of injuries and to date has a 0.717 OPS in 137 games for the Tigers. Not a stellar year for Candelario, but he's being given every chance to become a fixture in Detroit's lineup.
4) Jorge Soler - Soler can't stay healthy.  He's played in 182 games the last three seasons and has never hit more than a dozen homers in a season. I'll still draft him in the last round of fantasy drafts next spring because if he can stay healthy I believe he'll have an OPS of 0.850+ while hitting in the middle of Kansas City's lineup. That's pretty good value!
5) Daniel Vogelbach - We all know how I feel about the Vogelmonster. Yet, if I'm truly being objective I can't place his 55 career games and Mendoza Line batting average anywhere else but #5 on this list. Bummer.

I wonder how many of the other 29 teams have had all five prospects make it to the big leagues?

John also included a couple of autographs in his package. 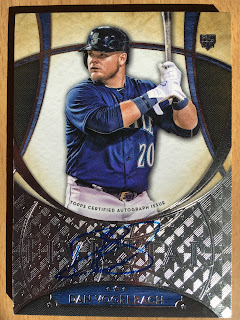 Above is the 2017 Five Star base auto. I don't have many cards from high-end products like Five Star in my collection. Chasing Vogelbach's cards as allowed me to experience how the other half of the collecting world lives! 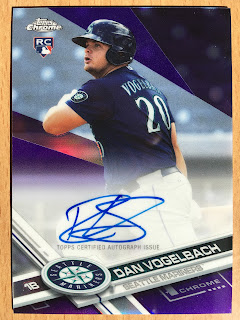 The 2017 Chrome parallels have been growing on me as of late. Purple parallels are numbered to 250.

I've actually been picking up some random Vogelbach cards from Ebay when I come across a good deal. I found a bunch of auto cards from the same seller which started at a dollar each. I put in a low bid on all of them and won five for $8.50 shipped. Pretty good deal if you ask me!
When Vogelbach starts doing this more often (see video above) I may try to flip them and buy some of his cards I don't have. I'm not missing much, but the vacancies I do have in my Vogelmonster collection are all listed for a pretty penny.