My Dan Vogelbach player collection has 182 cards from the 2017 baseball card collection season. Topps and Panini both tried to capitalize on his rookie status and he was featured in 19 different sets. It was a fun time trying to chase them all down, but also a little bit hectic. This year has been much slower going. Before Heritage dropped I had found only 13 different cards this year, and six of them were from the Donruss Optic Autograph insert set.
The Vogelmonster finished the 2018 Triple-A season on the disabled list, from a phantom injury I can find nothing about in the middle of August. He has since recovered and he saw his first game action in the month of September earlier this week with one at-bat versus the Yankees. On September 12th he was announced to pinch hit for Seattle's ninth place hitter, but when San Diego brought in a lefty to combat the VOGELMONSTER, he was then taken down in favor of the right-handed Mike Zunino, who promptly struck out. So it goes.
Vogelbach is near the bottom of the depth chart for a Mariners club which isn't going anywhere soon. They're 11 games back of Houston in the AL West and 8.5 games back of Oakland for the 2nd Wild Card spot. As of this writing Seattle has 15 games left in the season. They are NOT making the postseason in 2018.
You'd think this would be the perfect time to audition a couple of players for next year. Nelson Cruz is 38 years old and a free agent after this season. If you were a GM, wouldn't you want to see what you have in your best minor league bat?
I heard rumblings on message boards that Seattle's front office doesn't think Vogelbach can handle MLB pitching and that he is nothing more than a "Quad-A" player. You'd think if that was how they felt about the Vogelmonster that they would try to trade him for something they did like.
For the record, Vogelbach had a 0.979 OPS for Rainier this summer and he walked 18 more times than he struck out. I may be a little biased, but it sounds like he's an above average hitter, who has a great eye, and he just needs a shot.
Maybe he'll get a start or two down the stretch? Maybe the Mariners won't re-sign Nelson Cruz? Maybe he'll be traded this winter to a team who needs a 1B/DH type who can mash? Maybe, maybe, maybe. 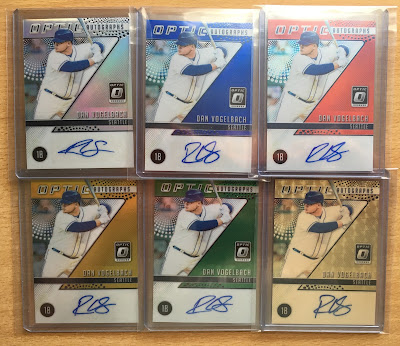 Two things are for sure. I still believe in The VOGELMONSTER and the Optic Autographs rainbow possesses an extremely high level of badassery.

Thanks for reading and may your baseball team finish the season on a high note.