Greg, the author of The Collective Mind, is a set builder. Actually, I might go as far as to call him the preeminent set builder within our corner of the blogosphere. He has many kinds of want lists and they are quite all-encompassing!

Recently, Greg perused my want lists, found about seventy cards I needed for my sets and he shipped them off in a bubble mailer. I'll have to hit up Sportlots.com to make this a fair trade, but not until my softball season is over. 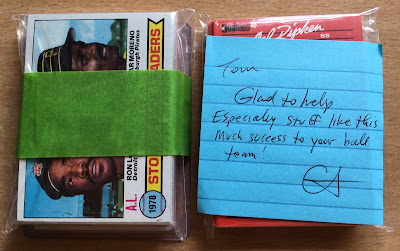 The playoffs start today. My junior high team starts eight 7th graders and one 8th grader. We're young, but we've had a good season with a record of 11-6. In an eight team regional we were seeded as the 6th best team and are set to play the #3 seed. Honestly, we probably are the 6th best team, even though our winning percentage is better than every MLB not from Boston. It's a stacked regional and we'll need to play well and have the ball bounce our way if we're to even make it out of the first round. Wish us luck!

On to the cardboard!

Here's the contents of the team bag on the right: 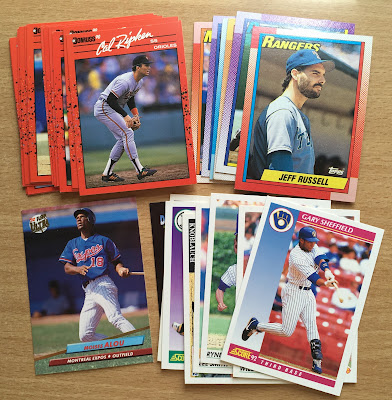 Four different sets from the 1990's were included and there was lots of star power! 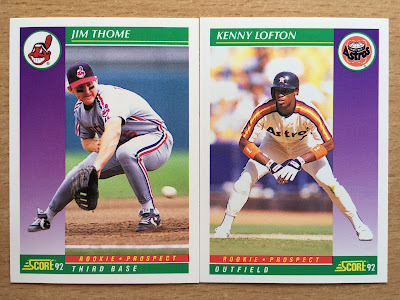 Thome! Woo-Hoo!  The local boy made the HOF!  I think once upon a time I knew Kenny Lofton started with the Astros. 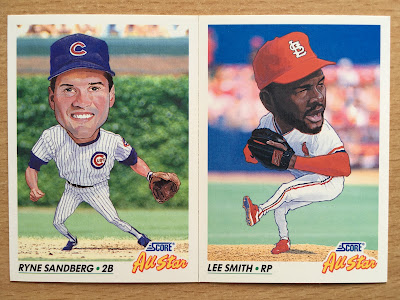 I always thought these All-Star cards were fun. I like how you can still make out the ivy and bleachers on Sandberg's card. 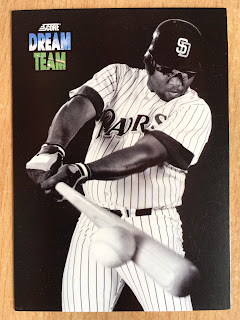 I don't know about you guys, but this is why I enjoy collecting older sets, including those from the junk wax era. There are some super fun cards here, you get to walk down memory lane, and you're able to learn a little bit in the process. 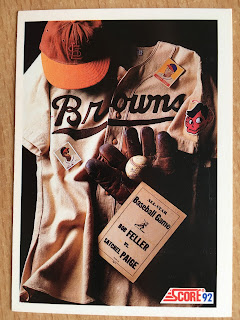 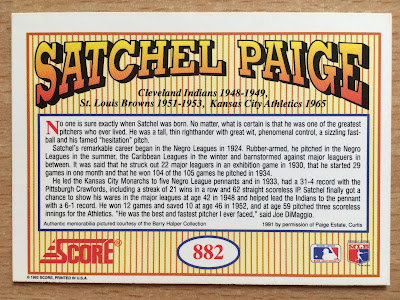 Big sluggers to close out the first team bag! 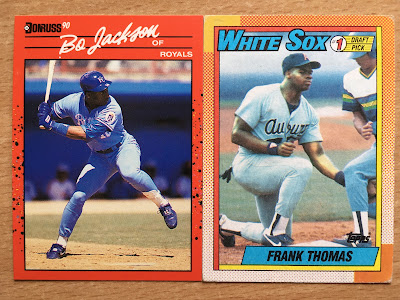 Alright, on to the second team bag. 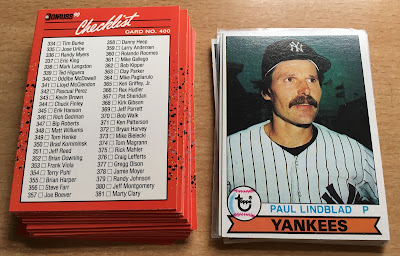 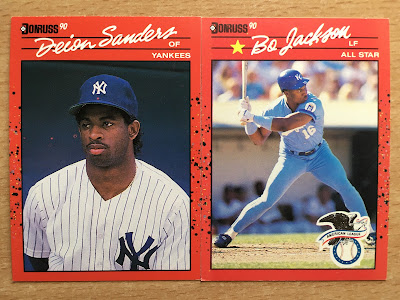 A pair of dual sport athletes! 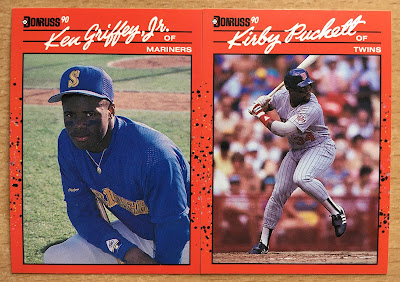 A couple of the games best outfield bats! Griffey looks so young! 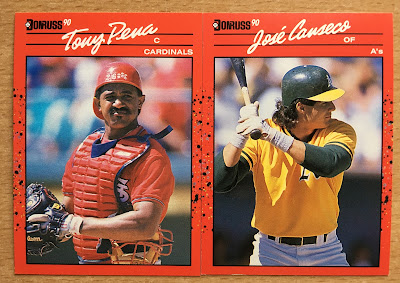 I'm not a Cardinals fan, but I really like this Tony Pena card and all of his catcher's gear. And, how about that YELLOW jersey on Jose Canseco? Whoa! 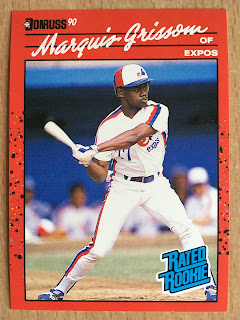 Who doesn't enjoy a Rated Rookie?

And to close out the 1990 Donruss I give you a pair of All-Time Greats. 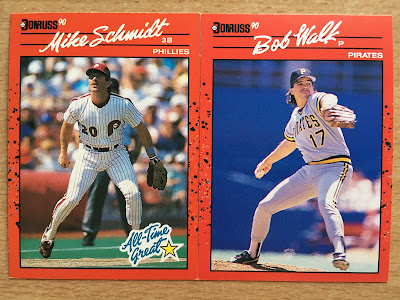 Not sure why they put the label on the Mike Schmidt card and not Bob Walk's. 1990 Donruss was known for having many errors within the set. I'm assuming this must be one of them.

Unmarked team cards from the 1970s are not easy to come buy. These are some huge gets for me. Especially the Don Zimmer card, as his ties to the Cubs usually keep things a little pricier than they should me. 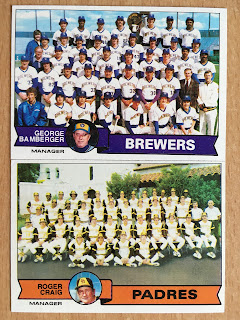 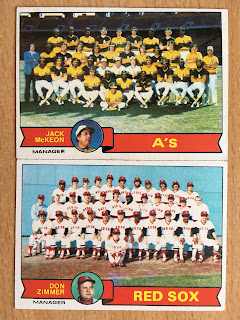 I never ever would have been able to tell you Ron LeFlore and Omar Moreno lead their respective leagues in stolen bases in 1978. 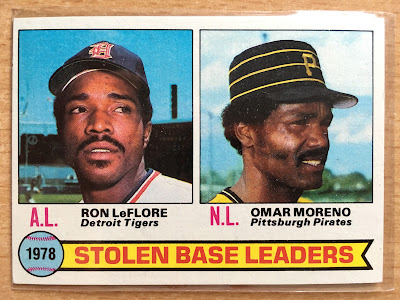 Last I checked the MLB leader in 2018 for stolen bases had 35 and second place had 30 steals. 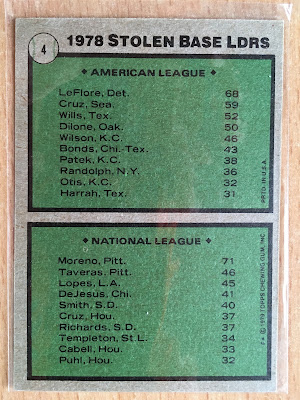 It's a bit of a different ballgame than what it was forty years ago.

All-Time Record Holders!  These are always fun cards to look at! 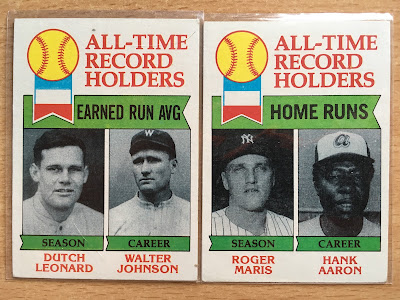 The Highest Career Totals for Home Runs would now have Barry Bonds at the top, followed by Aaron, Ruth, A-Rod, Mays, Pujols, Griffey and Thome. The 61 homers by Roger Maris has been eclipsed six times! 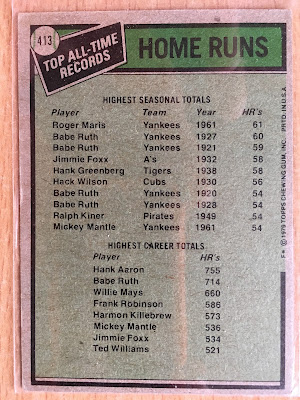 How about ERA? Baseball Reference actually has Hall-of-Famer Tim Keefe listed for the lowest single season ERA, with 0.86 in 1880. I'm not sure why Topps Recognized Dutch Leonard instead. Both played in the Dead Ball Era, right? 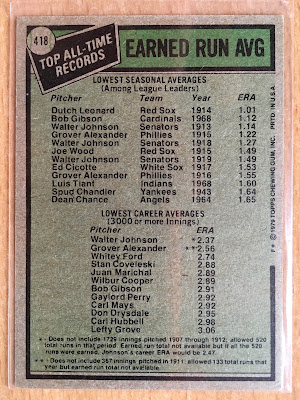 I don't think the Career ERA list has changed at all. We may never see the days of starters going 7+ innings on a consistent basis again. Clayton Kershaw and Chris Sale would be in the Top 10, if you ignored the 3,000 inning limit. Kershaw needs another 900+ innings and Sale requires about 1,500+. Crazy.

Here's the last card and it's for a special set, a non-traditional one if you will. 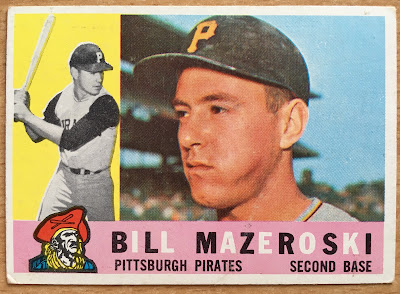 This Bill Mazeroski card is absolutely gorgeous and will easily replace 2004 card that had been sitting in the Maz pocket within my Hall of Fame binder. 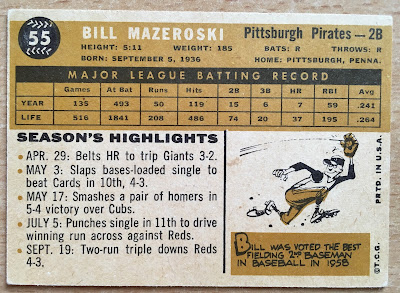 1960 Topps!  Wow!  I'm always looking for vintage cards of Hall of Fame members to enter into the binder and this one certainly qualifies!

FWIW, I've been dragging my feet on writing a post for my HOF binder. All in due time I suppose!