Cards for the Taking

This post has been in the works for quite some time. I have been sorting and collating and shuffling cards around my man room for the better part of this calendar year and I've finally reached the light at the end of the tunnel. 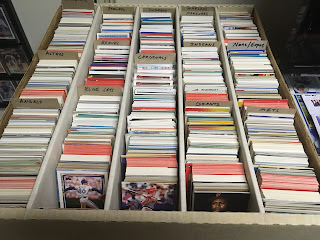 I have about 9,000 cards within two 5,000-count monster boxes that need to find a new home. That's right, the 9,000 cards are sorted by team and ready to go. For what it's worth, the majority of these cards are from 1988 to 1992, but there's some early 80s stuff and some other randomness included. Consider the years and realize there's not a lot for the Dbacks, Rays, Rocks or Marlins, but what I do have for those teams is fair game.

I'm not against mailing them all to commons4kids.org, but I'd rather send them to my blogging buddies. I have not been a part of the "Super Traders" group for more than a year and I don't want to sour a good relationship with someone if they aren't interested in 200-400 cards from their favorite team dropping unexpectedly on their doorstep. So, I won't be mailing these out blindly like I have in past. 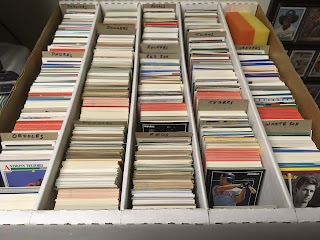 All you need to do is drop me a line at mrcoach00atyahoodotcom and claim some cards that will fit into your collection. Please, include your address so I know I'm shipping to the correct place. I'm prepared to pay all shipping costs and have already obtained a number of 200, 300 & 400-count boxes from BCW supplies to help in the packaging process. Feel free to make a comment so others know what you're interested in.

If you're interested in helping with shipping... Tough.  I'm paying it.  I don't want to mess around with who has and who hasn't paid. It's just easier for me this way considering how time poor I am right now with classroom and coaching duties.

But again, I'm not asking that you send anything back. Honestly, I'll be pleased as punch to just get some space back.

I've already started piles of catchers for Julie and Ivy cards for Matt (Once a Cub). I'll give them first claim to the Tigers and Cubs if they're interested. Zippy Zappy has asked for some Cardinals and Giants, but there is plenty to go around of those teams if someone else is interested. Matt (SCC) has a pile of non-baseball ready for him. Maybe he'll want something else?  John (Johnny's Trading Spot) has some 1999 Fleer Tradition ear-marked for him, but perhaps I can talk him into a stack of Braves?

Who else can I send some cards to?