I bought a jumbo pack of 2017 Topps Series 1 about two weeks ago from my LCS and found an '87 autograph inside. That was a nice surprise! I flipped the auto on Ebay for a little more than a blaster and I've been living dangerously with a positive balance in my PayPal account ever since.

In my jumbo pack I also received one of the Topps Now Ultimate Card Giveaway scratch off promotional cards. 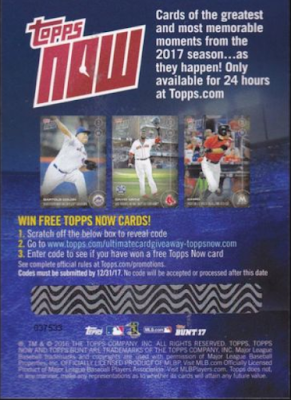 I scratched the card, went to the website, typed in the code and was greeted with this message:

Yeah, I kind of expected that would happen. I didn't know much about the promotion, but I thought this might be a cheap way of getting a Dan Vogelbach card or another cool Cub card during the season.

My Paypal account still had all that cash in it from earlier so I pulled the trigger on an Ebay auction. 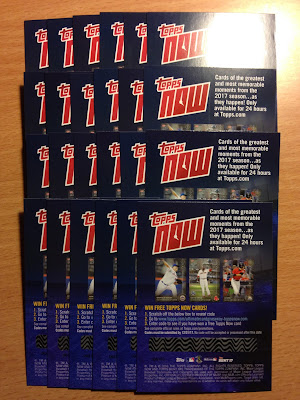 With my third card in I was greeted with this message:

My hopes were high that one out of every four or five cards would be a winner. No such luck. With the one code from the jumbo pack, plus the other two dozen from the auction, I found two winners out of 25 cards, which is an 8% chance of winning. That's not horrible I suppose, but I have no idea if I beat the odds or if I had some bad luck.
The downside is I thought a winning scratch-off card would net me a Topps Now card anytime during the season. For instance, I was hoping the Vogelmonster would hit three bombs in one game and then I could redeem on of my two winning scratch-offs and pounce on a card to commemorate the event. That would have made my year, with respect to the hobby.

Here's what I won instead:

After you enter a winning code Topps then sends you an e-mail. Those e-mails have revealed that I'm the proud owner of cards #23 and #80. I suppose I have an outside chance of one of those cards being a Chicago Cub, but more than likely it'll give me two cards to try and flip into something that fits my collection.

In summary, that one jumbo pack has treated me fairly well: