Laura and I just returned from our 10 day trip to California to celebrate our wedding anniversary.  She was stationed in Monterrey when she was in the Air Force, but until this point I had never spent much time in The Golden State, save a quick destination wedding.  So, we put on our walking shoes and did the tourist thing . . . big time!

There are lots of pictures in this post, so hold on and get that scrolling finger ready!

Just north of San Francisco is a great forest of redwood trees known as Muir Woods. Some of the trees were over a century old and obviously they were very large. 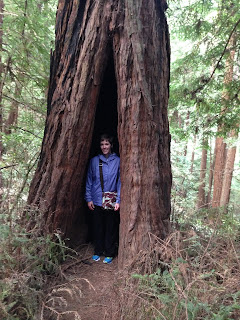 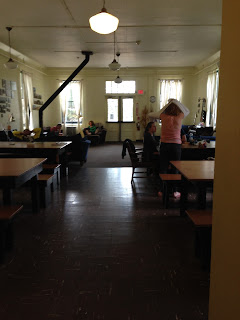 The San Francisco area is pretty pricey, so we spent the first two nights in the Marin Headlands Hostel.  My first hostel experience!  I hadn't slept in a bunk bed since college. LOL

While north of the big city, we explored the coast and found that a good portion of it was covered in retired forts and bunkers.  Seventy plus years ago the region was on high alert after the bombing of Pearl Harbor. 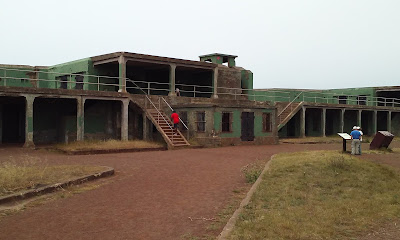 We also found some sea lions "sun" bathing on rocks.  I used the quotation marks around sun, because we didn't see much of it during the first few days. 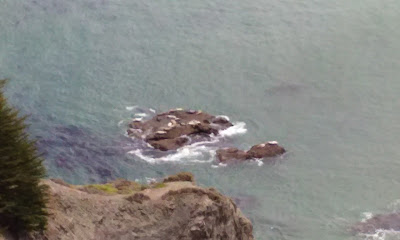 There was a ton of fog though!  That's Alcatraz in the distance. 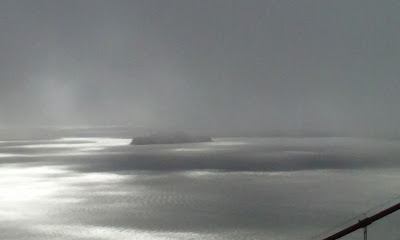 We didn't catch our first glimpse of that California sunshine until we went to Oakland to catch an A's game. 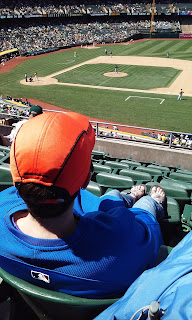 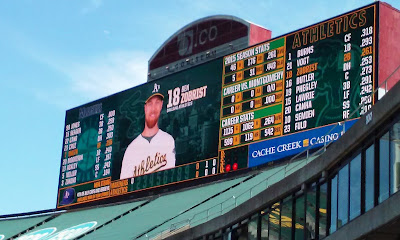 I was pleased to see local product Ben Zobrist make a couple of nice plays at second base and record a multi-hit game.

Laura, always a bit on the cold blooded side, sat in the sun the entire game. I sat in the shade one row behind her.

I've read some horror stories about the Oakland Coliseum and expected the worst, but I was pleasantly surprised.
Side note: the fans in Oakland are very musically inclined.  Lots of horns and drums!

That evening we visited Jack London Square and had a beverage at Heinold's, which is a place Jack London frequented before knocking out such literary treats as Call of the Wild and White Fang. 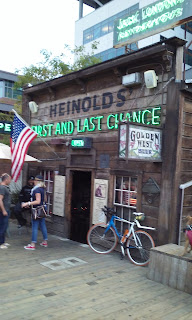 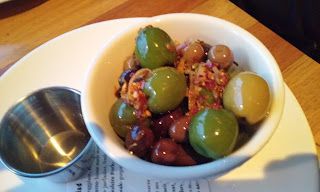 Heinold's also has a slanted floor on the interior as a result of the great 1906 earthquake.  In total, the bar was less than 200 square feet in size and it was chocked full of nostalgia.

We went to a nice restaurant that evening and Laura had olives for dinner. We were on vacation after all!  No judging!


The following evening we attended a game at AT&T Park.  I bought some of the cheapest tickets I could find, but there was no complaining about the view. Gorgeous!

Yes, that's my wife wearing a stocking cap while holding a cup of hot chocolate in July.  For the record I was donning Under Armor and a hooded sweatshirt.  Does San Francisco ever get warm?

Laura's cousin John, below in orange, attended the Giants game with us.  His cousin, David (red), was the gent who was kind enough to put us up and be our very knowledgeable tour guide of San Francisco. 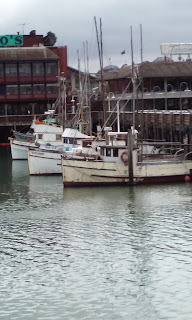 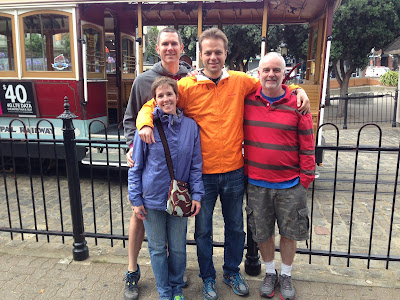 We took one of the famous cable cars to Fisherman's wharf. 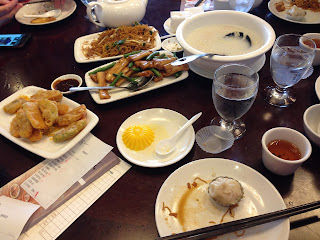 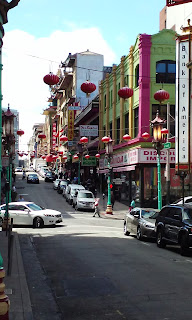 We spent time exploring Chinatown and went to Dim Sum for the first time.  I also snuck off and purchased some warm coconut buns for Laura, which she has since developed a grand affinity for.

David knew of many great places to eat and he always had something for us to see and/or do. 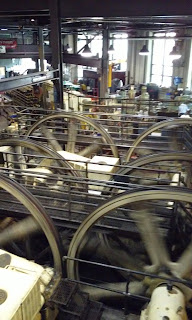 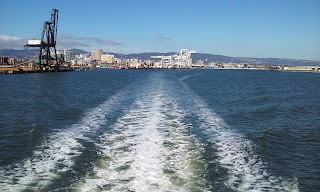 One of my favorites was visiting the cable car museum, but another good one was taking a ferry across the bay from Oakland to San Francisco.  So much to see and do!

Our next stop was in Monterey where Laura was able to secure us stay in a little cottage via VRBO.  To get there we drove down the coastal highway, CA-1.  BEST. HIGHWAY. EVER.   Curvy, hilly, and the views of the ocean/beaches are unparalleled.

Jointly, we've decided that we would like to live in Monterey one day, but I'm fairly certain I'll need to win the lottery before that dream is realized.   Monterey is situated right on the coast and presents some very beautiful views, and I'll show you a picture soon enough.  First,we have a picture of my favorite beer from the trip: 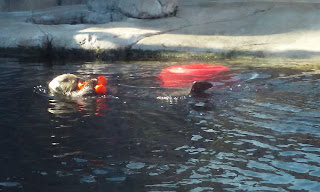 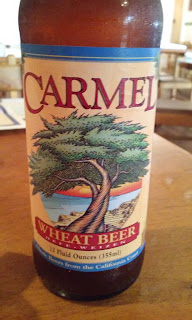 Monterey has a wonderful aquarium and my favorite picture from this group was of the sea otter.  Because, of course it is.

The next day we abandoned Monterey and took the trek down to Big Sur for a day.  We found more redwood trees, some nice hiking trails, a waterfall, and our favorite beach. 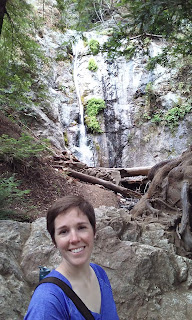 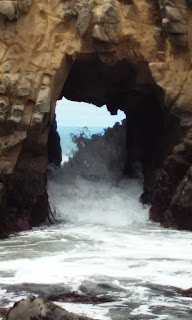 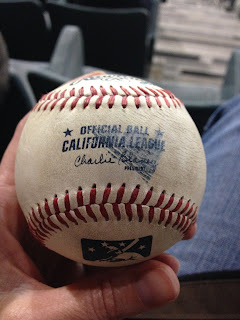 We got on the jumbotron between innings and Laura "caught" a foul ball.  Actually it bounced into our row from two sections over and Laura was able to stop it as it rolled under our seats. The intercom started to play the following audio clip when some fans started to chase it. . .

. . . and when Laura finally corralled the ball she yelled, "Mine!"  I was so proud! 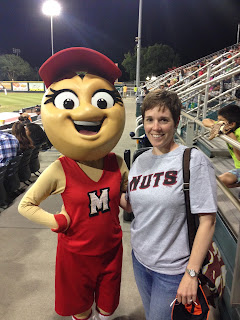 The Modesto nuts are the Single-A affiliate to the Rockies and they have three mascots: Wally the Walnut, Al the Almond and Shelley the pistachio.  Laura got her picture taken with Shelley, the only female baseball mascot I can think of off the top of my head.

We returned the next day to the bay area and walked the length of the Golden Gate Bridge. Finally, some sun in San Francisco! 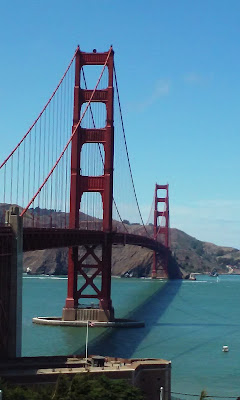 It was a great trip overall and an excellent way to spend our anniversary together. Thanks for stopping by! 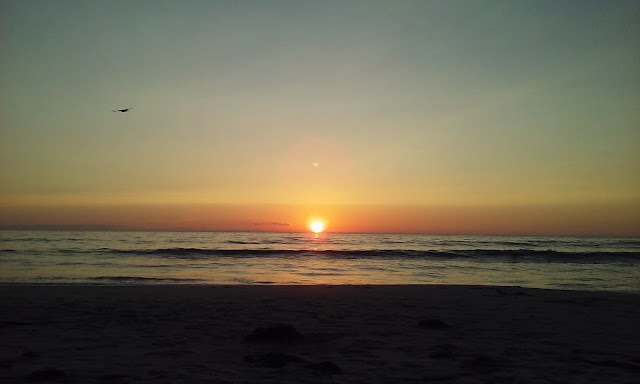