Deep In The Heart of Texas

I kidnapped my friend Jeremy last Friday and we spent the day driving from P-town to McKinney, Texas. It was a long, yet uneventful drive, which landed us on the doorstep to Jeff and Nichole's new house. Jeff and Nichole have moved a collective fourteen times in the eleven years they have been married.  And although that statistic is a little mind boggling, I'm sure there are other couples who have moved at a more frequent rate.  Right?

Jeff, Jeremy, and I all graduated from P-town High back in the day and anytime we get together we kind of regress to our sixteen year old selves . . . except there's the added bonus of adult beverages!  I'm not sure how our wives put up with us when we're altogether.

The weekend started out on a great foot as we had breakfast at The Donut Kitchen.  Gormet donuts?  Chorizo sliders?  Yes, please! 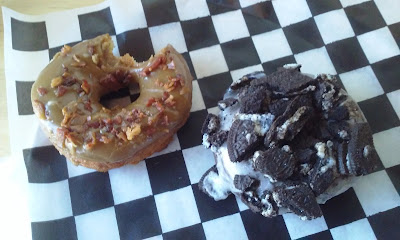 Maple Bacon on the left, and Cookies N' Cream on the right.  The chorizo sliders (not pictured, because I ate it too fast) have cake donuts acting as buns and the chorizo is topped with gouda cheese.  It was definitely my favorite.

Afterwards we made the trip to Houston. Jeff and I both needed to cross Minute Maid Park off of our lists.  Now I only need seven more ballparks.  (FWIW, I think Jeff needs less than that.)
Yep, we all wore Cubs shirts to watch the two teams from Texas duel it out. And no, we weren't the only Cubs fans there. 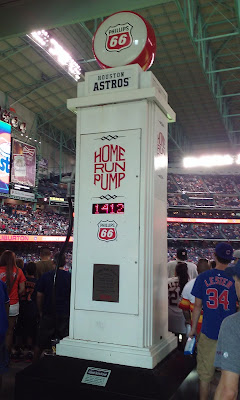 See! Jon Lester was there, too!  Right next to the Home Run Pump, which keeps track of all the Houston Astros homers at Minute Made Park.

More people from Chicago!  We bumped into the Blue Brothers on the concourse: 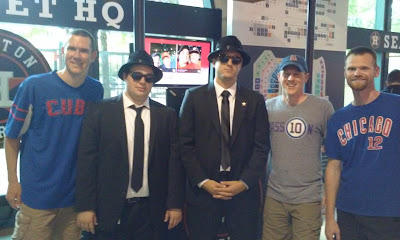 And we met Craig Biggio and the Astros' mascot, Orbit . . . kind of: 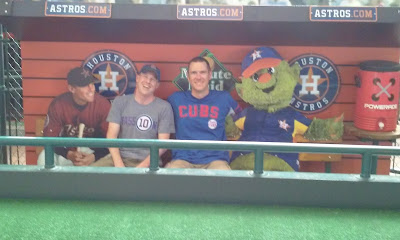 The game was moving right along until the players remembered it was an American League game and that they are supposed to be loooooooong.   So the last three innings saw nine of the game's thirteen runs score, a replay challenge, and the benches clear.  Never you mind all of the pitching changes!

The next morning we drove the four hours back to McKinney and for dinner that night we had some of that famous Texas barbecue. 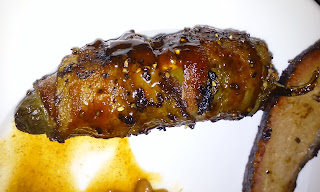 On the very far right there is some brisket, but the item in the center is what I want to focus on: this was a good-sized jalapeno stuffed with brisket and cream cheese and it was wrapped in a piece of bacon.  I could have died right there. It was easily the best jalapeno popper I have ever had, and I've tried more than my fair share over the years.

On Monday Jeremy and I said our goodbyes and we made that long journey back to the midwest. It was a great, but brief trip.  Thanks for putting up with the three of us, Nichole!
Posted by P-town Tom at 7/21/2015 08:21:00 PM