I've never been much of an Allen & Ginter fan.  I like baseball players and A&G stuffs its product with comedians, writers, rappers, and anything which should pair up before boarding an ark. Yet, this is the tenth anniversary of he product, and it today was release day. 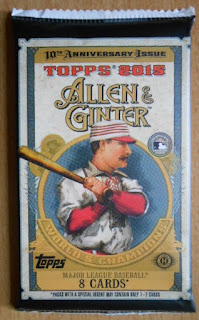 So, I went off to my local card shop and I was disappointed to find no A&G on display.  The owner had a literal shoebox full of vintage that kept me busy and before too long the UPS man walked in carrying a case.  Cha-ching!

Let's take a quick look at some of that vintage.  I plucked out four cards for my collection and because the owner doesn't think much of rounded corners I picked them up for fifty cents.  So sweet! 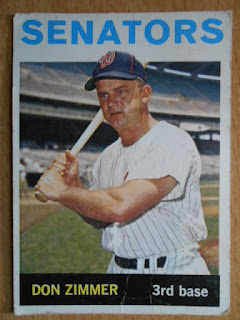 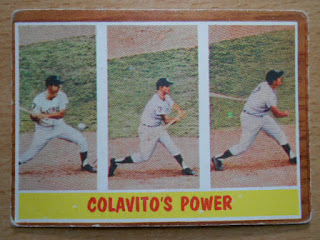 My mini collection of Don Zimmer is doing quite well, thank you!

The box had about 1,500 cards in all and all of the stars had already been picked out. I made some strong overtones that I would have liked to have purchased the shoebox of vintage, which consisted mostly of late 50s and 60s.  I thought I could have sent out the loved vintage in trade packages. The owner balked at my offer by saying he wanted other collectors to have a chance to dig through the box.  It was fun to dig through!

So anyway, I bought the first pack of A&G from my LCS.  Let's dive in! 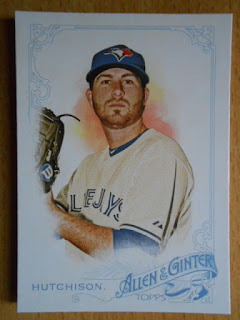 Zach Lowe, a professional basketball writer. Double meh. These are the types of cards that have kept me away from the product in the past. 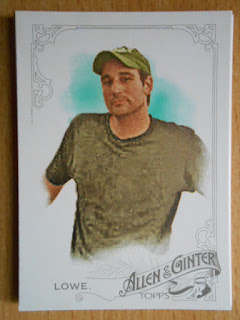 Miguel Cabrera is a nice pull for a pack, but even he is less than thrilled about Hutchinson and Lowe. 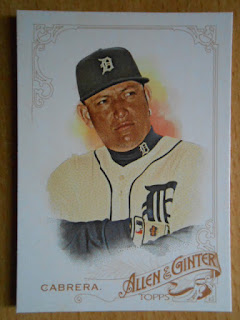 Ooooooh.  Now, this is something I can get behind. I may have to collect this insert set. 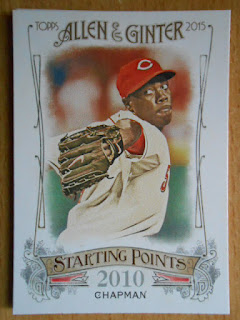 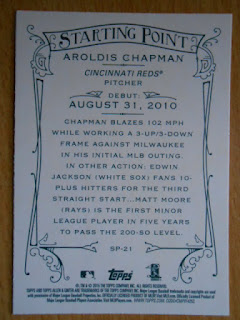 One mini per pack!  If you're looking for a better mini I think you'd be hard pressed to pull one in a pinch.

Here's the reason my pack only had seven cards. A Stephen Strasburg relic . . . nice! 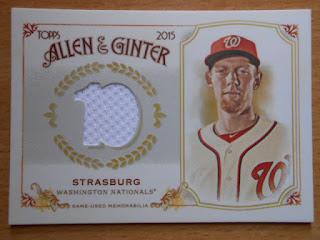 Two things here:
1. Remember it's the 10th anniversary of the A&G set, thus the jersey swatch in the shape of a ten.
2. I guess I'm spoiled collecting the Cubs where I might get a jersey card with a pinstripe in it.  National fans probably don't have many of those.  Plain white jersey = yawn.

The last card of the pack is Carlos Rodon.  Not bad.  I like my rookies! 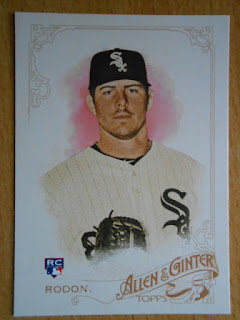 Overall, that wasn't a bad pack at all. Good star power, and insert, a relic, a rookie, and a writer.

This won't be the last time you'll see Allen & Ginter on this blog.  I signed up to battle it out in Gint-a-Cuffs with some of the blogosphere's finest.  I'll look to complete a base set, and I'll probably need some help, because I'm only purchasing this one pack and the box for the competition.  I'm sure the blogosphere is up to the challenge!

Edit: Since posting this live I've found a contest for breaking a single pack of A&G.  I don't think my post above has what it takes to win, but I thought I should alert others about the contest: Bubba's Bangin' Batch of Baseball Bits. Have fun and thanks for stopping by!
Posted by P-town Tom at 7/22/2015 03:17:00 PM