As we creep into the decade of the 80s we find some heavy hitters and one of the best modern day pitchers ever. 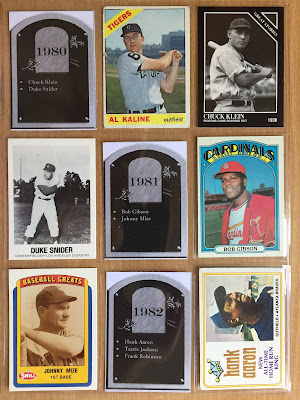 Without further delay we're going to dive right into a deeper look at the cards and the careers of the players! 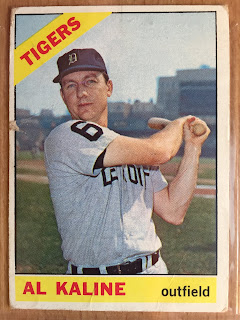 Al Kaline played his entire twenty-two year career with the Detroit Tigers. He was elected to 18 All-Star games, won ten Gold Gloves and one World Series. He never hit more than 29 homers in a season, but he logged 399 in his career along with 3,007 hits to complement a 0.297 batting average. Kaline was a model of consistency during his career. Something I didn't know, his nickname was Mr. Tiger. Very nice. Do Detroit fans still refer to Kaline as Mr. Tiger? 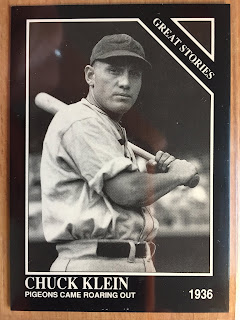 Chuck Klein's career is often overlooked and it took the Veteran's Committe to vote him into the Hall of Fame. His first six years in baseball were just astounding as he won an MVP and a Triple Crown. The numbers he put up in 1930 with Phillies are ridiculous. He recorded 250 hits, had 170 RBIs and batted 0.386, but he didn't lead the league in any of those categories! Klein's last seven years in baseball weren't much to write home about as battled multiple leg injuries, but he did finish with 300 homers and 0.320 batting average. 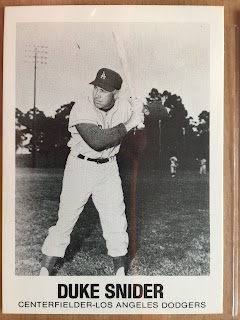 At some point I would like to add a 1950s card of Duke Snider to my collection. But for now, this one will have to serve as a placeholder for the Duke of Flatbush. Snider won two World Series and was an eight time All-Star. Snider had a four year stretch in his career where he slugged 40+ homers, scored 100+ runs, knocked in 100+ teammates and batted no lower than 0.292. He finished his career with 407 home runs and a 0.295 batting average. If I had to pick a player to anchor my pitching staff I would start with Bob Gibson, circa 1968. He was an 11.2 WAR player that season, with a 1.12 ERA, while leading the league in strikeouts and giving up the fewest hits per every nine innings. He won the Cy Young and MVP awards that year and Gibby is often cited for the reason why the pitching mound was lowered before the 1969 season. Gibson was no one trick pony either. His career speaks for itself just as loudly as his menacing scowl on the mound. 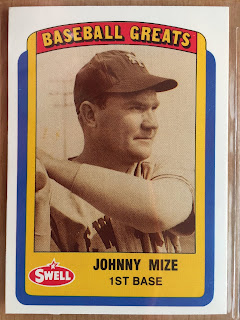 Johnny Mize is the second player in today's post who was voted in by the Veteran's Committee, but in my opinion he no less deserving than the other members on this page. Mize was a 0.312 career hitter who belted 359 homers. He led the league in home runs four times and he served in the military during World War II right in middle of his prime years. He very easily could have have another 100 homers to his career mark. If that's not enough he was a key contributor to five World Series championship teams and was a ten time All-Star. 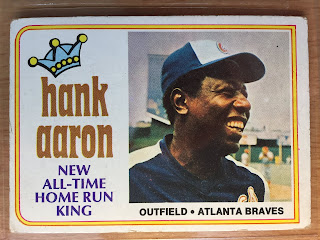 We end today's post with one of the biggest names in baseball history, Hank Aaron. Aaron was elected to twenty-one straight All-Star contests, won three Gold Gloves, he was an MVP, won two batting titles, has over 3,000 hits and he is a member of the 30-30 club. He's the career record holder in RBIs with 2,297 and total bases with 6,856, 3,020 of which came via the round-tripper. Aaron, obviously, is on the short list of one of the all-time greats.

My favorite card on the page is the last one shown. I love numbers and baseball history ... add in a smiling Hank Aaron and we have a winner!