Coming Down Off the High

Look, this is a family blog. So if you're hear for a fantastical tale about drug usage then you're knocking on the wrong door.

I'm talking about baseball and you're here because we share a common love in the world's greatest game. You may have played as a kid or perhaps your career lasted a bit longer. You probably collect baseball cards and more than likely you bleed the color of your favorite team. So, I figure you can relate to what I'm going through.

It's not a sob story and I'm not looking for any sympathy, but sometimes it's cathartic to write it all out.

My favorite team of late wears the colors of maroon and gold, the Dunlap Eagles. We had a great season. And boy, do I mean GREAT. We won our conference for the first time in school history. Twice in the post season we "walked it off" to win Regional and Sectional plaques. Last night we played our Super-Sectional contest, with a chance to go to State, and lost 1-0. It was a well played game overall and we gave ourselves a couple of chances to score in the last couple of  innings, but we just came up short. We finished with a record of 27-6. Stretch that record out over the course of 162 MLB length season and we're a 130+ win team. That's pretty amazing.

It's weird. I don't have kids, but I bonded with the young men on this team over the last five months and they kind of become family. In fact, many days this spring I spent more time with them at the field then I did at home. Now that this magical season has ended it's struck me that I'll never have a chance to coach them again.

It's very much like a punch to the gut.

Sigh, all things come to end I suppose.

Here's a piece of cardboard which is somewhat relate-able to this post. 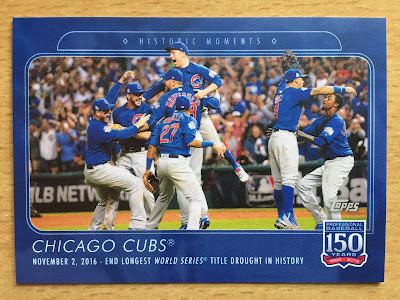 The Cubs won the World Series and it was the best moment ever. But before too long it's time to turn the page and start all over again. It doesn't lessen the experience of what happened in anyway, it's just the emotions and connections were so high and then they're so low.  Life.  Sigh. 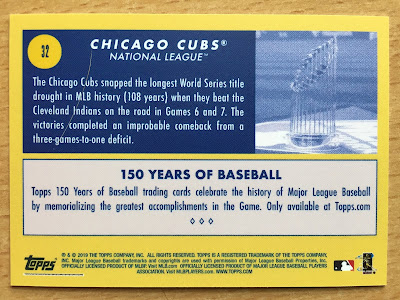 This card will join its brethren in my Cubs World Series binder.

It's always nice to take out the binder, flip through, and remember the good times.  Thankfully, I made a set of cards using the Rookies App so I can do just that with my 2019 Eagles!