Page 24 brings us another wonderful collection of cards which spans four different decades. All of these are keepers in my book. I'd love to replace all the Conlon cards in the binder at some point, but Doerr (much like Lombardi) played in the 1930's and 40's and their cardboard is scarce and expensive. Maybe I'll get lucky and find something on the cheap, but it would probably have to be all banged up like the Stargell on this page. Not that there's anything wrong with that!  I love my Willie Stargell card! 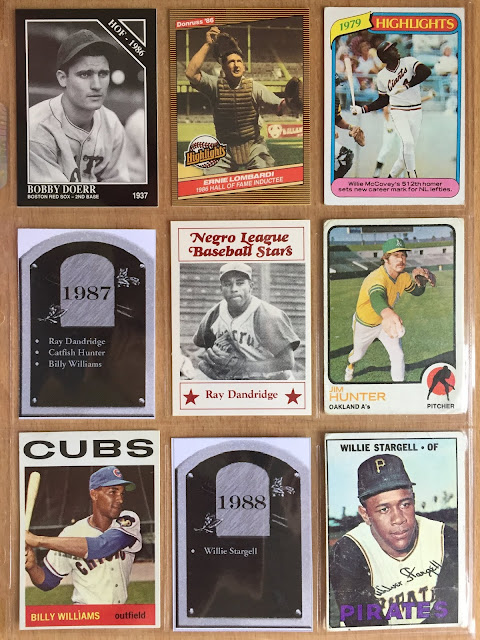 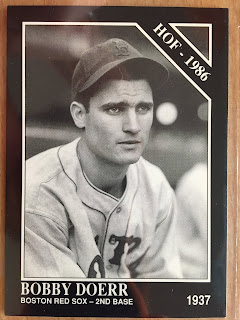 Bobby Doerr's fourteen year career was spent exclusively as the Red Sox second baseman. The 0.288 hitter missed the 1945 season when he served in the military. He was elected to four All-Star contests before his tour of duty and five afterwards. Doerr had a little pop in his bat and actually led the AL in slugging percentage in 1944. Ted Williams once dubber Doerr as the "The Silent Captain of the Red Sox." 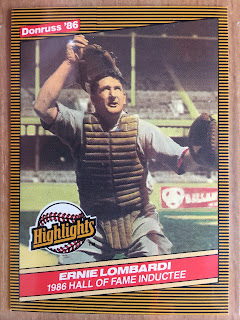 Ernie Lombardi gained entrance to Cooperstown through the Veteran's Committee in 1986, thirty-nine years after his retirement. He won a World Series with Cincinnati, two battling titles, an MVP award in 1938, and he was an eight time All-Star. Lombardi hit over 0.300 ten times in his career and finished with a 0.306 average and 190 home runs. His most impressive stat to me is how he threw out 60% of would be base stealers during his MVP season. Wow! Honestly, Lombardi's stat lines remind a lot of Buster Posey. Is that Hall of Fame worthy?  I think I'm on the fence here with Lombardi. 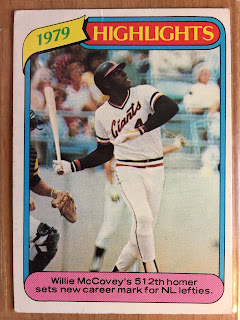 Willie McCovey's career began at age twenty-one in 1959 and he retired in 1980 at age forty-two. McCovey, primarily a first baseman, was the Rookie of the Year in 1959 and won an MVP award during his superb 1968 season. Remember, 1968 was the "Year of the Pitcher," but McCovey blistered that pitching to a tune of 45 homers, 126 RBIs and 0.293 batting average. He was walked intentionally 45 times that season! Whoa! McCovey currently sits twentieth all-time with 521 career home runs. 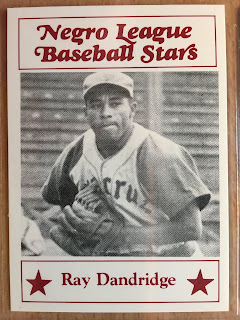 Ray Dandridge started his career in the Negro Leagues in 1933 as a nineteen year old and he retired in 1955 at age 41. He was known as a slick fielding infielder who would spray the ball to all fields. At an Old Timers game in 1988 he likened himself to Ozzie Smith. Dandridge played in the New York Giants minor league system toward the end of his career and even mentored a young Willie Mays in 1951, but he never received the call to The Show. 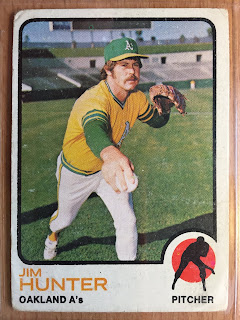 Baseball-Reference lists Catfish Hunter's nickname as "Jim." Odd! Hunter was and eight time All-Star and the anchor to five World Series champion starting rotations. His four year stretch from 1972 to 1975 was simply phenomenal. During that time he led the league in wins twice, WHIP twice, ERA once and was in the top 4 for CY Young voting all four years, winning it in in 1974. Bonus points for this card featuring a mustached Catfish in the yellow Oakland jersey top! 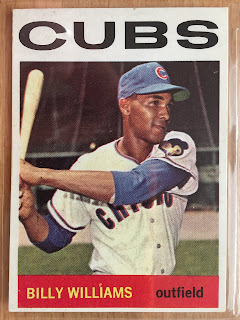 Sweet Swingin' Billy Williams was a fixture in outfield for the Cubs during the majority of his eighteen year career. He is actually sixth all-time with 1,117 consecutive games played! Williams was the Rookie of the Year in 1961 and he won the Sporting News Player of the Year in 1972 when he hit 0.333 with 37 homers and 122 RBI. Williams finished his career with 2,711 hits, 426 home runs, and a 0.290 batting average. 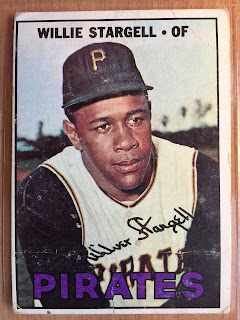 Willie Stargell, a career Pirate for twenty-one years, helped the franchise to two World Series titles. Pops was a seven time All-Star, an NLCS MVP, a World Series MVP, the Sporting News Player of the Year winner, and the Associated Press' Male Athlete of the Year and the NL MVP in 1979 at age 39. Stargell, the leader of fun-loving Pirates, was known for giving gold stars to his teammates after well-pitched games or big hits. (This is something we did during my high school season this past year!) He finished his career with a 0.282 batting average and 475 home runs, but he surely would have topped 500 if have not played almost nine years in cavernous Forbes Field.

What a great page. I love how there are three lefty power hitters represented here and one of them earns top billing as my favorite card of the page. The cards for Stargell and McCovey are pretty sweet, but it's tough for anything to best that 1964 Topps card of Billy Williams. But, you probably expected that from this Cubs fan!