Gasp! I Have a Summer Job!

I just finished my nineteenth year of teaching and the last time I had a summer job was back in 2001 when I taught 3rd graders during summer school. Yikes! That was an experience!

Generally, my normal school year doesn't end until late May and then things start up again in late July with junior high softball tryouts. There's typically a six week window during June and July where I'm doing some summer coaching, but not this year. School affiliated summer baseball is dying in central Illinois, but that's a story for another day.
A former player of mine is slowly working his way into baseball and he inspired me to give my longtime dream of working in baseball a chance. Knowing ahead of time that I wouldn't have my typical summertime coaching responsibilities I applied with the Peoria Chiefs for a summer job.

I had grand ideas of being the official scorer, but my spring and fall coaching duties conflicted with the Chiefs' schedule of games quite a bit and that bubble burst fairly quickly.

I'm a Data Entry guy! I found my niche with the TrackMan system the Chiefs use.
A Bradley University intern worked the TrackMan system most of April and May and I filled in a couple of times when needed. The intern graduated and moved back home so now I'm one of four guys who works on a rotating schedule to operate the TrackMan system. As of this post I've worked five games in June and eight overall.

I have a badge! 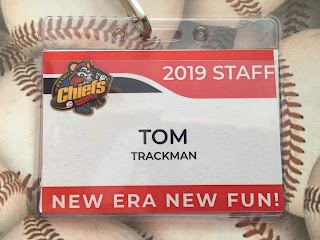 I clock in about thirty minutes prior to first pitch and enter the starting lineups into the computer.

In general, I'm responsible for numbers 1 through 4, in the picture below, during the game. The main two I spend most of my time are #2 and #3, which includes the umpire's call of each pitch or the outcome of the ball put in play and identifying the pitch type. Pitch types can be tricky! 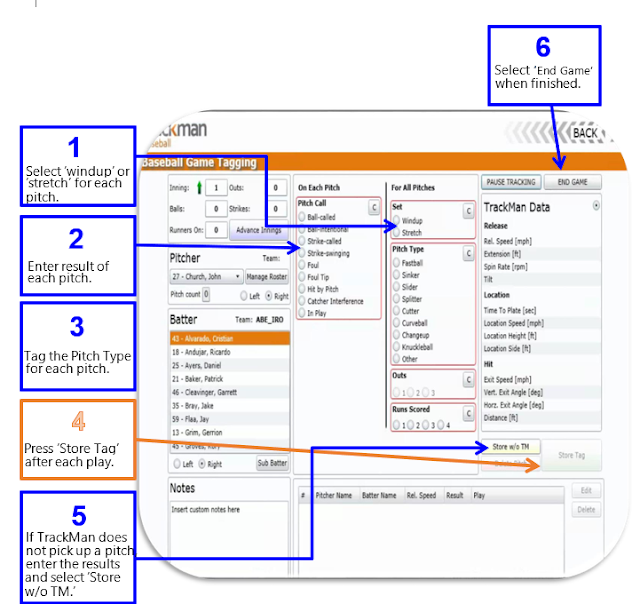 I watch each pitch live, but sometimes it's difficult to determine the difference between pitches so I look at the data the TrackMan system gives me with each pitch. The velocity and spin rates of each pitch are often good indicators. Once I combine the numbers with my veteran eye I usually can tell the difference between a fastball, slider, curveball and changeup. There are other options, but I'm not privy to information on the movement of the pitch so I try to stay away from sinkers, cutters and splitters.

At the end of the game I upload the data into the system and after it's "cleaned" by the TrackMan staff it is then sent to the Chiefs and Cardinals to digest and dissect. I'm usually clocking out and walking to the parking lot about five minutes after the conclusion of the game.

Here's a picture of my work station. 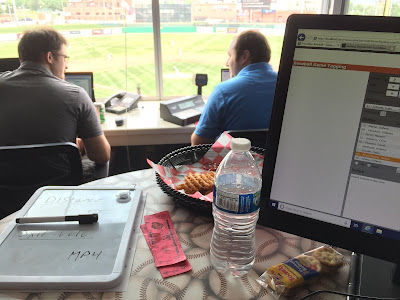 The dry erase board is for the radio broadcast. When a home run is hit I'm supposed to write down the distance of the homer and the exit velocity off the bat and show it to guys in the booths to my right (visiting broadcast) and left (home broadcast).

The two gentlemen in front of me run the live GameCast of the game for internet viewers and Dozer Park's scoreboard. The guy on the left has another career and just does this for fun and extra spending money. The gentleman on the right is working for a living in baseball. He does three innings of radio, is in charge of the post game summary and numerous other jobs. They are both twenty-something guys and love to talk baseball, food and women. For the most part I just play the role of "fly on the wall" but occasionally I'll chime in or I'll be asked to settle a debate. For instance, last Monday they asked me to settle the hot dog condiment debate! LOL

The red pieces of paper on the tabletop are "Chiefs Bucks" that I may use how I see fit. I get $10 each day to spend on concessions. Nice perk!

In summary, I get paid to watch baseball. I also get the behind-the-curtains view of how a minor league baseball staff produces its product on game day. Baseball talk and other musings keep me entertained between innings and I also get some coupons to spend on ballpark food.

I'm really enjoying it and am hopeful that I'll be lucky enough to continue working this position during upcoming seasons. For yours truly, it's like the best summer job ever!
Posted by P-town Tom at 6/17/2019 04:17:00 PM