I had a real nice Saturday meeting up in Dubuque, IA, with the couple responsible for introducing me and my wife to one another. They are great folks and live in rural Wisconsin, so unfortunately we don't get to see them as much as we would like.  My mom and sister, both from the P-town area joined us on the 165 mile trek north, but we took separate vehicles.

I had plans.  Big plans. And said require my wife and I to leave at zero-dark-thirty so I could spend a couple of hours at a card show before meeting everyone for lunch.  #dedicationtothehobby

The was a card show in Dyersville, which is about thirty minutes west of Dubuque, at the National Farm Toy Museum.   For he record, I did not enter the farm toy portion of the buidling.

For those of you not in the know, Dyersville is also the address for the baseball field from Field of Dreams. I was at the movie site back in 2011, and although I wanted to visit again we were on time constraints.  Plus, there was a celebrity softball game during the morning and I didn't want to pay twenty-five dollars for the cheapest ticket to have the right to wander around the grounds. The celebrities listed were names like Pete Rose, Robin Yount, Andre Dawson, Brooks Robinson, Rollie Fingers and Carlton Fisk. Maybe I should have considered going instead of hitting up the card show?

Anyways, the show was great.  It was easily the largest show I had been to since my last trip up to the Chicago suburbs AND there was no admission!  There was about thirty vendors who had their cards all spread out over about sixty tables.  It was glorious.

There was vintage, binders chocked full of autographs, dime boxes, and just an incredible array of ticket stubs, bobbleheads, baseball postcards and PLENTY of high end cardboard. The main teams shown on the tables were the Cubs, Cardinals, Twins, and Yankees.  Yep.  Yankees.  SMH.

I came away with only five cards to add to my collection, but an entire stack of odds and ends to distribute among my blogosphere brethren. I could have purchased a nice parallel of Kris Bryant, or a Jorge Soler autograph, or a Kyle Schwarber jersey card, but instead I flipped my mental blogger list and had fun scavenging up and down the aisles.

Here's a couple of the card for my collection: 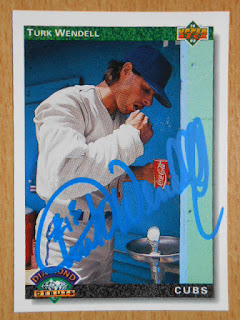 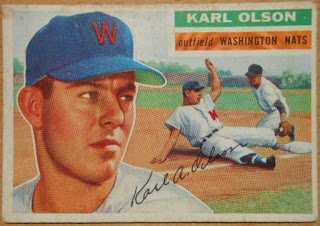 I've been a Karl Olson kick of late. He was a pretty average 4th outfielder type back in the 1950s, but we share the same surname. For a couple of bucks I picked up his card from the 1956 set.  Nice.

Turk Wendell was one of my favorite Cubs in the early 90s because he was so quirky.  For three dollars I picked up an autographed card of his Upper Deck rookie.  A couple of things to note here: 1. he used a blue pain pent, which looks nice, and 2. he's brushing his teeth because he didn't like the taste of black licorice.  He chose to chew licorice when he pitched to build up his bad a$$ persona. You know, because chewing tobacco is bad, and he wanted that look without suffering through the potential side effects. 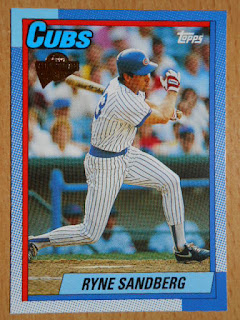 I didn't know Sandberg had a 2004 Topps All-Time Fan Favorites card, but now it's mine!

The last two Cubs cards were on the top of dealer re-packs. I have purchased these from the same dealer at a show in the Quad Cities before and remember enjoying what was inside.  For four dollars you get the card on top, a relic card and another twenty or so cards.  I figured, why not? 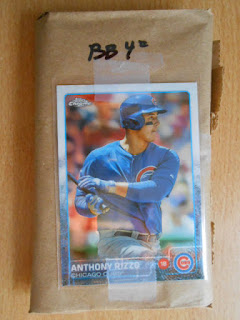 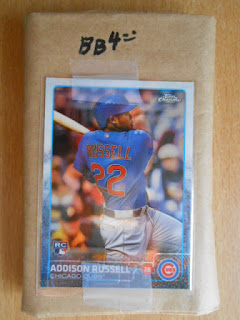 So, there's my five cards.  Honestly, I'm a little shocked that's all I bought for me, but I'm pretty happy as well. I'll be sending out a couple of packages with the some of my finds this week (including Night Owl's contest winnings), and the rest will go out in trade packages or random PWEs down the road.

My one regret is that I didn't have time to sit down at the dime boxes, but the trade off was I got to spend time with my family at lunch and later at the National Mississippi River Museum and Aquarium.
I think everyone but Mark Twain was happy about that.