"Just" a Few Cards from BWTP 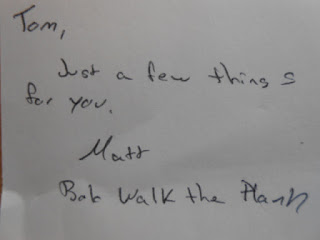 Just.  What a funny word.  There's a plethora of meanings for the word, but here's the one I think Matt, from Bob Walk the Plank, intended within his note.

You be the judge.

I'll reveal you them in the order of my level of excitement.

This was the first card from the mailer, and I thought I found the best card right off the bat: 2005 Trilogy Signature Materials card of Aramis Ramirez by Upper Deck.

"Just" the other day I was mentioning how I thought ARam was one of the top five third basemen in Cubs History.  Now I have serial numbered card (62/75), with a bat relic, a jersey relic, and an on card autograph.  Did I mention that the picture of the card is acetate?  This card has EVERYTHING, but it was to be topped (twice).

Behold, "just" you run-of-the-mill 2008 Sweet Spot Signatures card of Mr. Kerry Wood.
I have Carlos Zambrano's Sweet Spot Signature card from the 2005 set, but this is KERRY WOOD!  Numbered 56 of 58, it's the 409th card added to my Kerry Wood collection and only my second certified autograph!  Woot!  What a beautiful card! 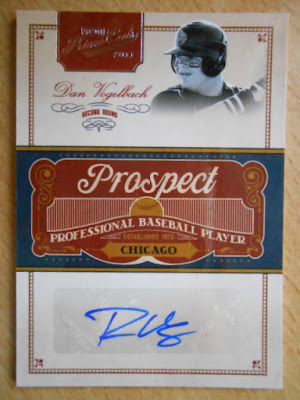 The Vogelmonster!  This is a 2012 Panini Playoff Prime Cuts autograph, serial numbered to 299. 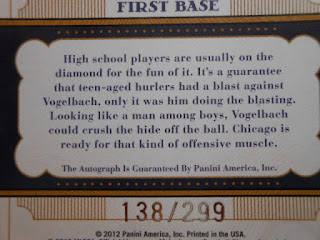 I have a couple of the Vogelmonster's autographs, but nothing from his early card days.

I pretty much had to pick myself up off the floor after seeing this one.

You know, "just" you're typical reaction when adding a beast of a card to your collection.  Except, it's my collection and it's my favorite minor leaguer!  Ahhhhhhhhh!   The VOGELMONSTER!

Ahem.  Allow me to take a second and compose myself.

Yes, Mr. Walk the Plank, in number, there was "just a few things" for me.  But please keep in mind that you pretty much broke my baseball card mojo-meter.