Here we are at the last page of the binder. Page 38 features another eight players I remember watching on television or in person. There is loads of variety in these eight pockets with cards from six different manufactures. Also, there are a couple of really well done cards here and it'll be tough for this collector to single out a favorite card by the end of the post. 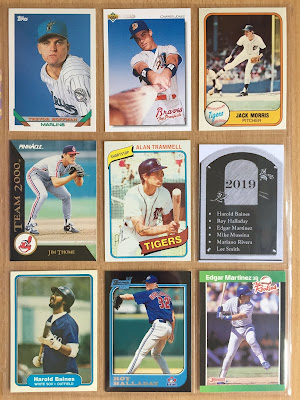 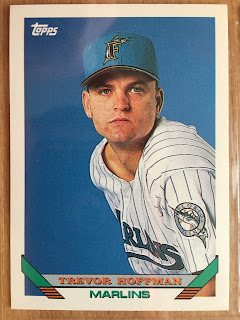 Trevor Hoffman was drafted by the Reds in 11th round of the 1989 draft as an infielder. He was a career 0.225 hitter in the minors before he started toeing the bump during the 1991 season. Hoffman earned 20 saves during the '91 season in the bush leagues, but the Reds tinkered with him as a starter in '92 and then left him available during the expansion draft and the Marlins selected him with the 8th pick. Fast forward and Hoffman finished with 601 saves (2nd all-time) and 2.87 ERA over 18 seasons. His devastating change-up helped him to two Rolaids Relief awards and seven All-Star games. 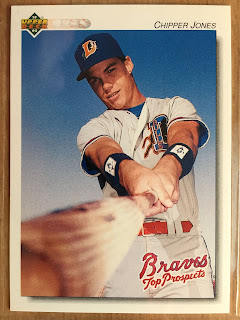 Larry Wayne Jones was drafted first overall by the Braves in 1990. The switch-hitting third baseman flashed a solid glove at the hot corner, but it was his bat that helped him to stand out. During his first full season with the Braves he helped Atlanta win the World Series. He would go on to win the MVP in 1999, a batting title in 2008 at age 36, two Silver Slugger awards, and he was elected to eight All-Star games. Chipper finished his career with 468 homers, more walks than strikeouts, and a 0.303 batting average. 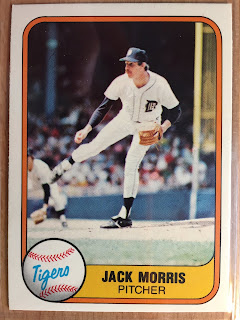 Jack Morris was a horse. He was one of the last great starting pitchers who had a fair chance of finishing what he started. Eleven times he pitched from than 230 innings in a season and he finished his career with 175 complete games to go along with a 3.90 ERA and 254-186 win-loss record. Morris was a five time All-Star and he won three World Series titles (Detroit in '84, Minnesota in '91, and Toronto in '92). He was the MVP of the Fall Classic with the Twins when he pitched three games, including a ten inning complete game victory in Game 7 over the Braves. 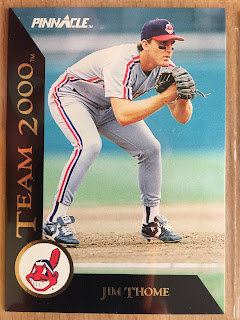 Jim Thome hit bombs during the Steroid Era and nobody ever questioned that he did it cleanly. Thome is a local product and his family, all big dudes, is known in the area for having light-tower power on the slow pitch softball fields. He came up as a third baseman, but as he filled out he moved across the diamond to first and eventually would settle in as the DH for his teams for a number of years. Thome was a five time All-Star and won one Silver Slugger (as a third baseman) over twenty-two years. During that time he hit 0.276 with 612 homers and a 0.956 OPS. I've said this before on the blog, but Thome is one of my favorite players of all-time. 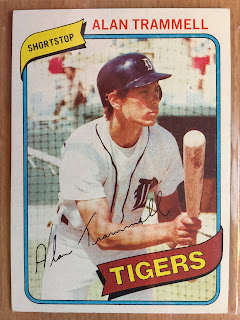 Alan Trammell played two decades at shortstop for the Tigers. The middle infielder could do a little bit of everything: four Gold Gloves, three Silver Sluggers, six All-Star appearances, and a World Series MVP in 1984. For me, Trammell is in the discussion of "Who belongs in The Hall and who doesn't," but so are a couple others on this page. Overall, Trammell's numbers aren't anything to sneeze at as he finished his career with a 0.285 average, 185 homers, and 1,000+ runs and RBIs. 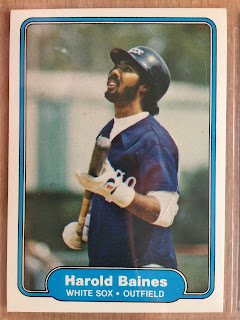 Harold Baines was the first overall pick in the 1977 draft and spent about 40% of his time as an outfielder and the other 60% as a designated hitter during his 22 year career. Baines never hit thirty home runs in a season, but he finished his career with 384 round trippers. In total, Baines was a six time All-Star selection and he has one Silver Slugger to his credit. Baines finished his career with 2,866 hits and a 0.289 batting average. 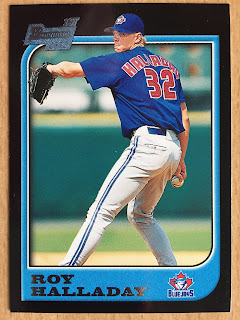 Roy Halladay was another pitcher who could throw nine innings and it wouldn't surprise you. In fact, he led the league in complete games seven times during his sixteen year career. Halladay, known for being a fierce competitor, was elected to eight All-Star games and won two Cy Young awards. He was a great control pitcher and he topped the league in SO/W ratio five times during his career. Hallday's career record was 203-105 and he sported a nifty 3.38 ERA. 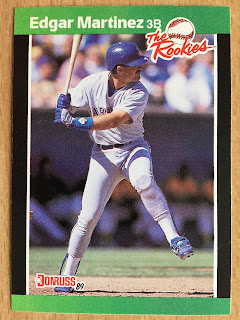 It has been argued by some that Edgar Martinez is the best player in Mariner's history. That's quite a statement considering some of the other names: Junior, Big Unit, Ichiro and The Kid. Gar was a doubles machine who played all eighteen years of his career in Seattle. The fan favorite was a bit injury prone and eventually moved off of third base to DH during his age 32 season. Overall, he won two batting titles, five Silver Sluggers, and he was voted to seven All-Star contests. Martinez did not experience his first full season until age 27. Here are his batting averages at AAA in 276 games: 0.353 in 1985, 0.329 in 1987, 0.363 in 1988, and 0.345 in 1989. What were the Mariners thinking? He still managed to collect 2,247 hits, connect for 309 homers, and bat 0.312 for his career.

Again, I really appreciate the variety of cardboard on this page. I thought at first the Thome card would be my favorite, but I can't get over the inaugural offering of Fleer and the Jack Morris card. It's a seldom seen action shot at the end of his delivery and the left field foul pole makes a cameo in the background. Very cool indeed. I believe all of these cards to be keepers, as they're all from pretty early in the careers of each player. Which one would you choose to be your favorite?

For the curious, here's a glimpse at the rest of the 2019 Hall of Fame class. 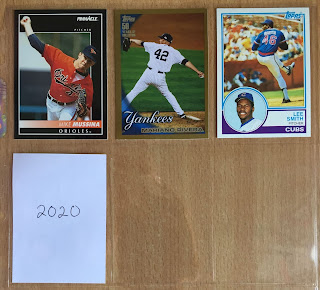 I won't offer an in depth post until the page is filled, which may take another couple years or so as I need to fill five more slots. Jeter is the only slam dunk for the 2020 class, but there are some holdovers from last ballot who will make it interesting.