October has been a busy month for sure.

Last weekend my wife and I traveled to Lousiville to support one of our good friends in his first Ironman competition. We skipped out on the biking portion to visit Mammoth Cave National Park, which is the largest cave on the planet. We saw two of the 412 miles of the cave, during a two hour tour, and then made it back to Louisville to cheer our friend on during his marathon. Congrats, Jeff!

I would show some pictures, but my phone died last weekend. It wasn't all bad though as I went five days without a phone and actually really enjoyed it.

I joined a mixed couples bowling league, which meets every other weekend. We started in late September and the schedule will run through March. I used to average 160 back in high school and have accomplished that one of the three weeks so far. I don't bowl with a hook... straight ball for me... and I'm still trying to find the old muscle memory. Hopefully, it'll come back soon!

I've been watching the playoffs on and off. It's just so hard to watch a full game when they run 3+ hours every single time. I also like to get to work by 6:30 in the morning, which doesn't really allow me to finish a game I start watching. Especially if I want to be on my math game in front of the teenagers the next day.

I was cheering for the Brewers. They seemed like a fun bunch and I liked Craig Counsil's managing. I found his take on Brian Kenny's bullpenning idea, from Ahead of the Curve, very interesting to follow. I'll be pulling for Boston now. I can handle Yasiel Puig and his antics, which seem to be part of his fiber. Sorry Dodger fans, but it's hard for me to support any team with the way Manny Machado has been acting as of late. Wow.  I knew he was talented, but I didn't realize he was such a poor sport and so immature. Ugh.

I finally received my cards from a Sportslot.com Box Order from five weeks ago. I'll be mailing out a few packages in the next week when I scrounge together a chunk of time. I've also started to attack the short stack of bubble mailers sitting on my desk. 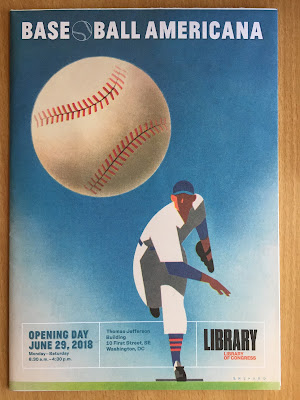 My mom's cousin took a trip to Washington D.C. and visited the Library of Congress and he picked up this program from their baseball exhibit. I love the artwork. I actually have a very similar piece as the lock screen on my desktop computer. I'm thinking about hanging the program on the wall, as the entire thing unfolds and the back becomes a 19" by 27" poster of the cover. Very nice. 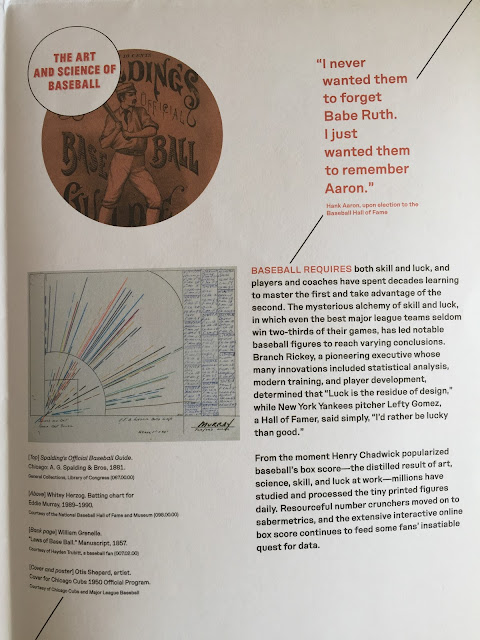 The other seven panels of the program feature quotes, anecdotes and pictures from baseball's vast history. I chose the "Art and Science of Baseball" panel to show here on the blog, because it's probably my favorite part about the game today. The spray chart is of Eddie Murray, kept by Whitey Herzog. Good stuff!

Cousin Mark is a retired math teacher and fellow baseball fan. I really got a kick out of this part of his note:

Ahhh, a man who gets it. That last sentence is gold!  Thanks for thinking of me Mark!

I hope everyone finds a little time to enjoy the World Series this week, for the long off-season is just around the corner.