Time: it's Feast or Famine

I'm currently in the middle of one of those spells where there isn't enough time in the day. Teaching, coaching and keeping up with the housework are at the top of the list. If you feel like you've read all of this before, it's because you have. Every summer I have way too much free time and then when softball and school commences it seems hard to simply tread water.

It's kind of like the Cubs as of late. I'm sure you heard how they scored one run in five straight games, all by a solo home run. Since then they have averaged 7.4 runs over the last five games. Feast or famine. Go figure.

I'm sitting on a couple of hefty yellow padded envelopes from Wes and GCA, which I'll get to in due time. I'm kind of using them as the carrot in front of the donkey's nose.

But, I needed a little shot of energy this afternoon so I ripped into a PWE from gcrl. 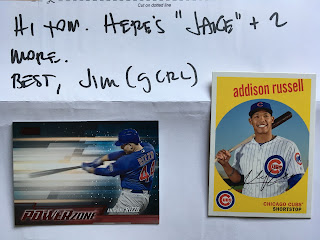 The blogosphere is so great: a red foil insert from 2018 Stadium Club and my first look at the recently released 959 Archives.

The Jake the note refers to?  Nope, it's not Jake Arrieta. 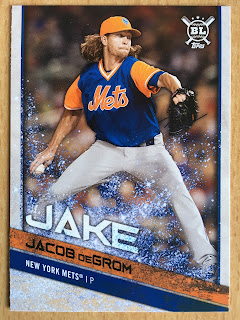 It's one of the four remaining Players Weekend parallels I needed for my Big League master set build. Very nice!