I feel like the leaves from our ash tree out front fell later in October last year and over a longer period of time.  Over a three or four week period we were able to mulch some leaves and fill our three garbage cans for the city to pick up each week.

Well, I've purchased twenty-five bags in the past week and I've raked/bagged four of the last five days.  The big oak tree on the north side of the house hasn't even really hit stride yet.  Oh, and since this picture was taken yesterday a whole new batch of leaves await collecting.

Laura has been a champ during the Great Leaf Fall of 2011.  She's so cute!  She pulls a new lawn waste bag over her head in an effort to unfold the silly thing.  They stand a good three feet tall, and the bag engulfs Laura all the way down to her waist.

Gus on the other hand has not been nearly as helpful as evidenced by the below picture. 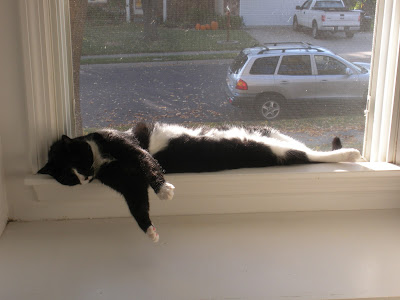