3 Highlights of My Week

No sense in burying the lede here. Acquiring a button relic card has been on my to-do list for years and I've been watching a Kerry Wood button card Ebay for quite some time. The price, unfortunately, hasn't budged.

I can sit watch National Treasures case breaks on YouTube for hours. It's a fun break to watch for sure.. I knew Dan Vogelbach had a traditional jersey card in the set, but what I didn't realize was he had a button card! 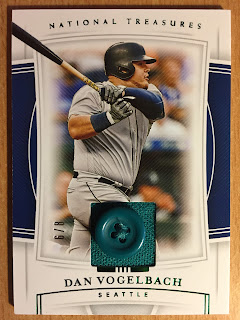 I set a timer and sniped this auction at the last second for a very nice price. How cool of a card is this!?!
The back might even better as it recounts the story of Yusei Kikuchi giving his son the middle name of VOGELMONSTER Daniel. 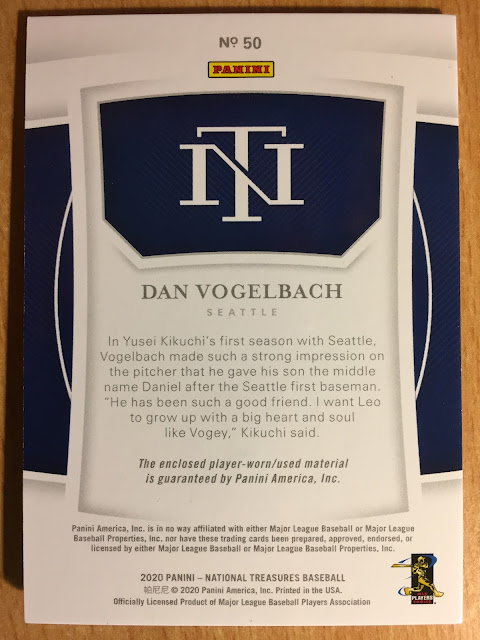 From time-to-time I've stopped in at Dunkin' Donuts, on a Friday, to grab some coffee to help me finish off the school week with a little extra kick. I guess my students have noticed and one of them introduced me to Dunkin's app. I earned a free coffee right away and decided to cash in. While I was there I splurged on a donut as well. 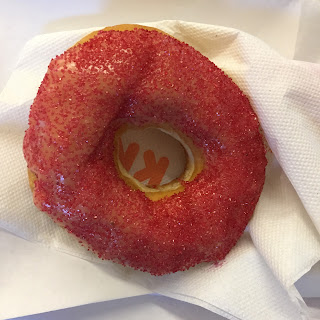 Behold! The Ghost Pepper Donut! It's a yeast donut, with pink frosting and sprinkles. I'm fairly sure the ghost pepper was only in the frosting. I picked up a tiny hint of hot pepper taste, but little, if any heat. I would definitely say this donut was far sweeter than it was hot.
I think those who can't normally handle spicy foods would have no problem consuming this tasty, sweet pastry. See if you can locate one and impress your friends!
Here's a picture of Hugo on our back patio. I like to think he's protecting us from the sparrows and juncos who frequent the nearby feeder. 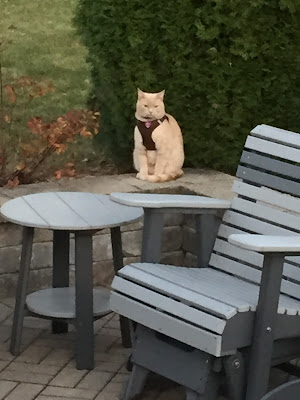 He's wearing his vest of Kryptonite, as well like to call it. When we first introduced him to the vest he flopped right over on his side. Later he learned to walk, but he did so as though his joints were fused together. The Kryptonite within the vest has slowly begun to wear off. Or perhaps he's built up an immunity? Now the vest only hinders his mobility enough so that he is not a threat to our little flying friends.  Good times.
What were the three highlights of your week?
Posted by P-town Tom at 11/21/2020 05:17:00 PM