Modest as I try to be, I like to think I have a pretty extensive Cubs collection. I mean, it pales in comparison to Wrigley Wax', but it does require quite a few binders and four 3200-count boxes to house all of my Cub cards. So yeah, I'm doin' alright. 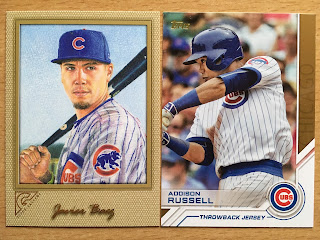 Matt, from the Sports Card Collectors blog, sent me a recent six-card PWE the other day and was it ever a winner! Each of the cards were new to my collection, which is not an easy feat for any trade package. His secret? Hit my collection where I've been most negligent: cards from the last couple of years. 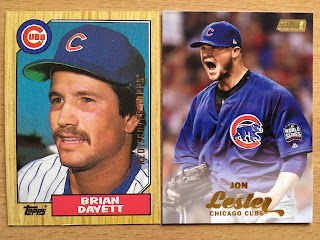 I know, I know. Timing. It's my own fault, I decided to become a Dan Vogelbach supercollector and then the Cubs Win the World Series. I only have so much budgeted for cardboard in a given year and I had to make a tough decision. I actually went over budget in 2017 on my Vogelmonster pursuit, while nearly completely ignoring my Cubs collection. 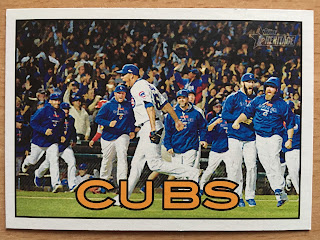 I don't regret my decision to focus my funds on a player collection, because I know my blogging buddies. Blogger are generous folk, who pull lots of Cubs and send them my way. Eventually Cubs collection for 2016 and 2017 would get up to speed and through the best way possible: trades. 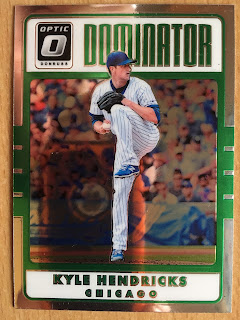 My main fear generated by solely focusing on Vogelbach was that I would miss cards like this Kyle Hendricks Dominator card. The front is nice, and I like the Donruss Optic product, but the back of the card is where it's at. 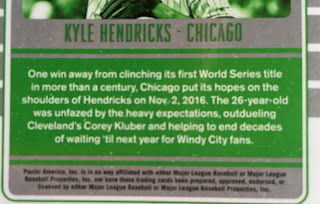 Yep, I have a World Series binder and this one will find its final resting spot there. I like how the back mentions "waiting 'til next year." It's as though the card was made with me in mind!  Ha!

Matt, thanks for the surprise cards. Even though I'm short on time as of late, the cards were truly a nice surprise to break up the rabbit race I've been running. FYI, I have a box of multi-sport cards that I plan on sending your way. I'm still going through the sorting process though. 😏
Posted by P-town Tom at 3/12/2018 03:37:00 PM