I've been in a writing funk as of late, so let'sget those creative juices flowing!  What type of set would you like to see produced in 2018?  Make sure to note important elements like checklist size, types of players included (prospects, retired), and price point.

Personally, I'd really like to bring back Topps Total in 2018, but I'm going to take a different route.

I was reading the blogs the other day and a post on Bob Walk the Plank gave me pause:


"I have my fingers crossed that Francisco Cervelli and Felipe Rivero get an auto soon!"

Matt's desires for more variety in the world of certified autographs got me thinking: how about an autograph set of non All-Stars?  Topps certainly has its favorites, and I can't really blame them. As long as Aaron Judge continues to move the needle he's going to have an autographed card in nearly every set. In fact, a quick Ebay search will show you he has ink in the following sets in 2017: Heritage, Finest, Tier One, Museum, Archives, Inception, Bowman Chrome, Stadium Club, Topps Chrome and of course, Topps Now. I know I'm probably missing a few. Again, it's a business and Aaron Judge autos are good for business.

On the flip side, there's a running joke about 2016 product around the blogs and within many box breaking circles concerning the omnipresent Henry Owens autograph. Owens had certified autographs in at least eighteen different Topps products, including many high end products such as Strata, Five Star, Tier One, Triple Threads, Tribute, High Tek, Gold Label and The Mint. I'm sure there was a collective eye roll when an Owens card was pulled in a group break.

Some may be thinking, "What about the Red Sox fans? Surely they were happy for the chance to acquire another Henry Owens auto!"

Honestly, I don't know about that. I'm a team collector and the volume of the Carl Edwards, Jr. autos in 2016 very much falls on side of overkill in my book. For the record, fifteen different Topps sets featured the Cubs' right-hander. Having Edwards represented in two or three different Topps sets would be fine by me.  Fifteens? No thanks. Talk about a player collector nightmare!

Boy, I wish Topps would spread the love around to other players.

In an effort to add some variety to the certified autograph stable I'm proposing a new set for 2018 and beyond.  Obviously, this is me just spit balling here, but I've been mulling this over and I think I have a model that could work.

Here are the specifics in bullet point form for easy digesting:
Again, I'm just tossing ideas around, but it's a product I definitely would be interested in. Please, keep in mind, I am a team collector on a very modest budget. Would I ever buy a pack or a box of Topps Variance as I've laid it out above? Nope. Would I look forward to its release each year and then hunt down all the Cubs autographs? Heck yeah!

Here's a sample checklist I would be looking at as far as the Cubs go:

I laid out three players for 2017, only because that's the current year. (And, because it's fun to go back and try to choose players.) I could have chosen Mark Grace, Shawon Dunston, Ryne Sandberg or Sammy Sosa for 1997, but I'm staying with the theme here. All of those guys have certified autos.  Rod Beck was the first guy I wanted for 1998, but that's just not possible. Obviously, there are some obstacles in making a decent checklist.  Maybe I should have held off on Jon Lieber until 2021, because in 2001 Lieber made his only All-Star appearance and won twenty games. I know I stated the desire to stay away from All-Stars, but I like Lieber as a choice at some point because he doesn't have any certified autos in circulation that I know of. It's all about Variance.

Also, I know Topps has issued sets like Fan Favorites in the past and last year Topps had Archives Signature Series All-Star Baseball Cards. These sets, when produced, always re-use older designs and always have an autograph component. So, not too different than what I'm suggesting. Remember, Variance is focused on the B-side type players... a way to add some variety to the certified autograph world!

Actually, do you remember when these hit retail stores last winter? 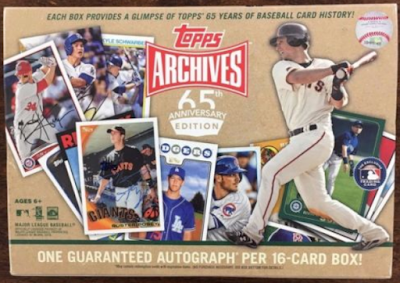 Archives 65th Anniversary Edition is a product very similar to what I'm suggesting. The main differences being Variance would be one consistent design, contain no base cards, and have more autos to chase. Plus, it's a set which wouldn't be produced during big anniversaries, but every year instead.

What do you think?  What you buy a box of Variance? Build the set? Or just cherry pick some singles like myself?