Well, it's taken me awhile, but I have finally found the right bobblehead at the right price to commemorate my trip to Tropicana Field this past June.

Many know Lou Piniella as an outfielder for the Yankees, or for his 1990 World Series Championship in Cincinnati, or his record 116 win season in Seattle. He captured two National League Central crowns while managing on Chicago's north side.  But the Chicago media somehow found a way to vilify him when the club turned in less successful years in 2009 & 2010.  From recent developments in Cubs news (firing of Jim Hendry), I think it's safe to assume that not everything was Lou's fault.  He'll always be one of my favorite managers.

Lou also spent three years managing the Tampa Bay Rays and at some point a bobblehead was created in his likeness and given away at Tropicana Field. Through the powers of eBay I have added Lou to bobblehead shelf in my man cave. 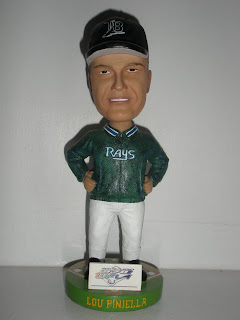